[stag_dropcap font_size=”75px” style=”squared”]I[/stag_dropcap]n the late 1980’s and early 1990’s, the basketball court in Phenix was always jammed pack, particularly on Sunday. Pick-up trucks and cars lined the hillside and there was overflow parking in the tiny football field up next to the road on the corner of Church Street and Charlotte. To call this patch of grass a “football field” is a bit of an overstatement, but when you’re a kid and of small stature in comparison to the running, jumping adults in the near distance, what was perhaps twenty five yards long felt one hundred yards and the equivalent of playing at Lambeau Field.

Blue jeans and flannel shirts and ratty white Reeboks adorned bodies that twisted in mid-air for a lay-up or a rebound ricocheted off the rim. Young women in short shorts and sundresses laid on the hillside and watched their boyfriends or young husbands. Inside Robbie Canada’s pick-up truck parked behind the near-end hoop, the NASCAR race blasted through the stereo’s speakers. When it came to the basketball court in Phenix, the names Richard Petty and Darrell Waltrip were more revered than that of Michael Jordan or Larry Bird on Sunday afternoon. And, if ever there was a serious pile-up on turn whatever at the Darlington 500, a stoppage in play would ensue on the basketball court in Phenix hundreds of miles away until the debris was clear and the pace car returned to its rightful place on the sidelines, engines revved up, a new leader out front.

Rules of the game

The rules of the game were simple then — no blood, no foul — but if, while on defense, you did knowingly foul someone on an attempt that had a legitimate shot at falling, it was on you to let it be known. On offense, calling your own fouls was a big no-no, and signaling “and one” after you banked a layup off the backboard was about as common during those days as seeing a purple cheetah grazing in a cow pasture. Getting bumped and banged around was as much a part of the game as the nylon netting on the rusted rim ten feet above. Finishing in contact or getting your shot off without ending up flat on your back (think Kevin McHale clotheslining Kurt Rambis during the 1984 NBA Finals, Celtics vs Lakers), is perhaps the reason us kids, who learned how to play basketball playing with adults, grew to have our own patented shots:

There were other patented moves displayed on the court during this bygone era, including Tim Trent’s body twisting, right arm outstretched hanging lay-ups, Steve Dunn’s left handed threes despite Steve being a righty, Michael Styers’ milkshake shot from just below half court3, Billy Mann’s artful rebounding prowess by using his belly to box out opponents for an easy putback, and Eddie Brinkley’s Superman layup from the foul line. Perhaps the most famous of all was Jeff Canada’s “Yo Mama” shot, which was an early rendition of a recent viral video like so:

In Phenix, though we had a full-court to play on, we played half-court. On Sunday afternoons, both sides of the court featured games due to the sheer number of people that came out. All other days, the far end of the court nearest the pool hill was the predominant side played on — large oak trees and grazing cows from Bobby Canada’s cow pasture the background in the immediate distance. Four-on-four was customary, but three-on-three would do if Sunday attendance was limited. On very rare occasions would a full-court game be played.

Just as with any true basketball game, if you scored a point, the other team received the ball in return. “Make it, Take It,” was not the standard format in Phenix. “Keysville Rules” we called “Make It, Take It.” If you want to play “Make It, Take It,” go to Keysville. Otherwise, score on offense, and then ready yourself to play defense. All games were played to fifty, win by four. Winner stays on, loser tucks his tail while a new team comes on in an attempt to dethrone the champ.

There was no three point line until the mid-1990’s when Jeremiah took a line of string and a can of white spray paint from his dad’s garage and sprayed one on one fateful Saturday morning. Thankfully, because the line looked like it was professionally done, Dexter Andrews, chief party responsible for the maintenance of Phenix Recreation Association, didn’t give us any grief about the spray paint.

And while the adults dominated the landscape each and every Sunday, it was us kids who dominated the blacktop the remaining days of the week; basketball was the predominant game, but there, too, we recreated NASCAR races on our bicycles using the court as a speedway and tackle basketball on the snow covered blacktop in the winter. It is where other games of our own creation were played, such as the classic Phenix sport of tennis ball. Tennis ball was a simple game — essentially baseball without a baseball, replaced with a tennis ball, which you had permission to beam at your friends’ head or body as he rounded the bases after cracking the ball toward Phenix Methodist.

The basketball court was where punches were thrown and lifelong friendships and memories were born. In short, the basketball court in Phenix (or simply the court, as us kids called it) was our home away from home — a sanctuary of youth.

Years ago, while reviewing Rabbit, Run by John Updike for Brad Listi’s online arts and culture magazine, The Nervous Breakdown, I found in what I read of Updike’s classic American novel and in the review I wrote a similarity to my own youth and that of my childhood friends. I wrote:

The basketball skips off the front of the rim, bounces away from the children, rolls to his feet, and stops. Rabbit bends down in his business suit and lifts the ball to chest level. He has almost forgotten what the leather feels like, “that old stretched-leather feeling makes his whole body go taut, gives his arms wings,” what it smells like. The cigarette smoke fills his lungs and he breathes out, flicking the cigarette to the ground, crushing it. He massages the basketball like a sore muscle with two hands, sets his feet, displacing loose pebbles underneath foot, squares his shoulders, and follows through. The ball reaches its highest point and cambers down from the sky and through the nylon net. He looks at the boys in the ice plant yard, sullen. “They have not forgotten him: worse, they never heard of him.”

Here’s to not forgetting; or worse, never knowing who those kids were in the first place. 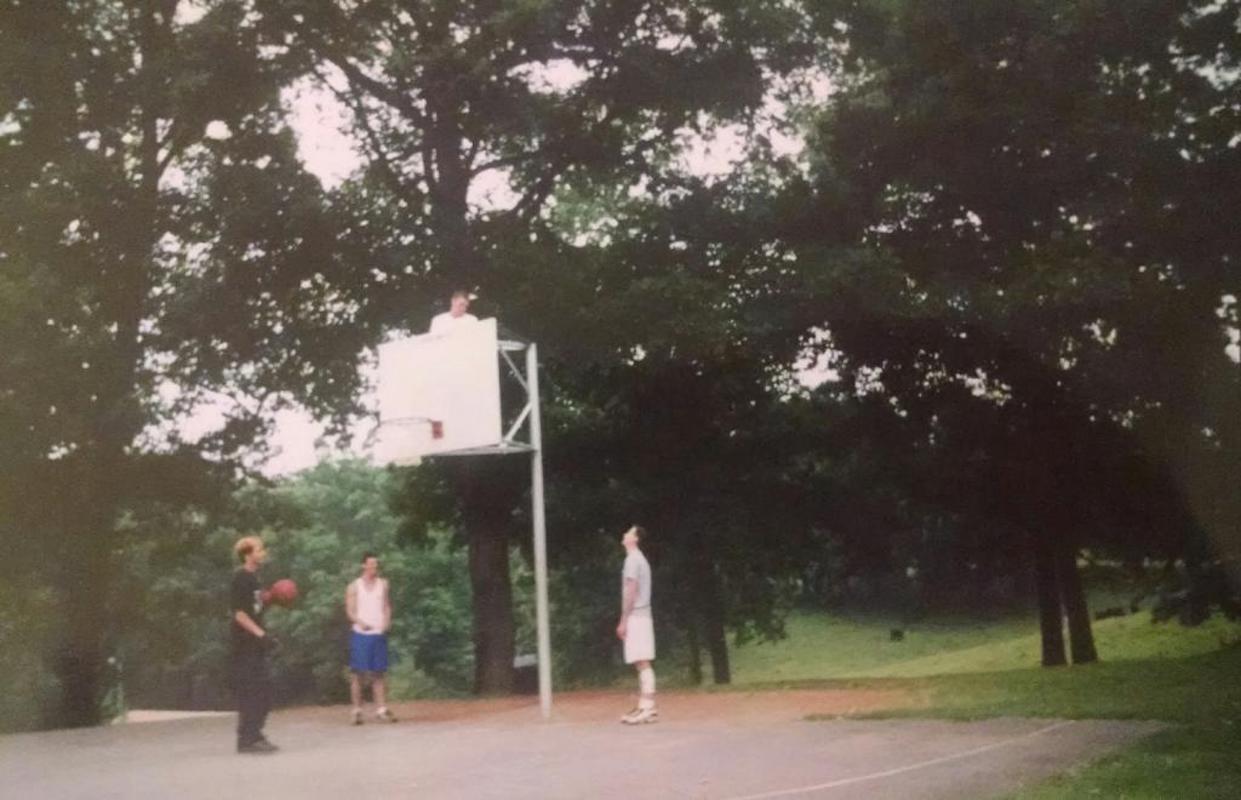 I bet you'd like one of these stories, too.

5 replies on “The Court”

Love this! I love the photo at the end

Thanks for reading, Caryn. I wish I had more photos like this, but they are few and far between. I guess you could say we were the Kodak generation 🙂

I enjoyed this one, Jeff, as I do all of your writing. Your heart, soul, and passion, comes through loud and clear.

I appreciate your kind words, Brenda. Thank you for stopping by.