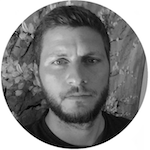 I’m a writer. You’ve probably gathered that much already. And, like John Mellencamp, I, too, was born in a small town (Phenix, Virginia). I can’t say I ever planned on leaving, but then one day, I did. I’ve been writing a book going on forever about my childhood there. It’s called When the Lights Go Out at 10:16. I’m working on another book, a collection of stories, aptly titled Life, Death, and Everything In Between, which will be released in 2020. It’s fitting. Hindsight being 20/20 and all. After departing Phenix, I headed off to the University of Virginia where I was a Rainey Scholar. I now live in Charlottesville, Virginia, with my wife, two kids, and a dog named Mozzarella Cheese.

I’m not a New York Times bestselling author, but I once cracked Amazon’s Top 50 bestseller chart for my story The Lady Next Door (passing the Secret Life of Walter Mitty in the process), which you can buy for 99 cents. That’s cheaper than a 20 ounce soft drink and will last you a bit longer. So, what are you waiting for?

I’ve interviewed everyone from the homeless on the streets of Charlottesville to the Avett Brothers and NBA legend Earl “The Pearl” Monroe. As humans, we all have our own unique stories no matter our status in life. Stories connect us with one another. Writing should serve a purpose greater than self; as Vincent van Gogh once said, “to express a sincere human feeling.”

This little space in Internet Land is where I search for the meaning of life.* Light, heavy. Heavy and light within the same breath. That’s what you’ll find here.

I’ve written about living with anxiety, depression, grief, anorexia, being chased by a murderous Canadian goose, suicide, schizophrenia, coping with the death of my dad, the greatest cow pasture rock ‘n roll band of all time, a runaway tractor, and why Phenix, Virginia is definitely not one of the worst places to live in Virginia. It had a street gang known as ‘The Aces,’ how could it?

The Lady Next Door

As I mentioned above, I have a short story for sale on Amazon called The Lady Next Door. It’s available as an ebook for 99 cents. Buy it here. You do not need to own a Kindle to read it. You can also read it by using the Kindle app for smartphones and tablets, which is free. To download the Kindle app onto your device, go here.

They were just ordinary rocks found in a driveway to most people, but not to the lady next door. They were the most beautiful rocks you would ever see.

The best way to get a feel for this blog, and the type of writing you’ll find here, is to click on a handful of the blue hyperlinks above or visit the archive. I try not to tie myself to any specific genre: memoir, fiction, personal essays on self-development. It doesn’t matter a great deal to me since I’m not a fan of boxing myself into a specific genre. Words are words. Plus, being 6’4″, I don’t fit in many boxes, save for the ones that hold oversized American refrigerators. Think of me like Jess Walter, but less talented.

If you’d like to message me, visit my contact page. I’m open to reader feedback and guest posts (even anonymous guest posts if you so choose). Two topics I don’t accept are religion and politics. You can save those for awkward Thanksgiving dinner conversation or social media. Speaking of social media, I’m not on it — at all. So, no need to look for me there. Any “Jeffrey Pillow” you run across is not this one.

Get updates by email

Become a reader. Subscribe for free and get updates of new posts by email. No spam, ever.

Rebels With a Cause

Urge magazine, Winter 2008. Cover story.
In 1987, an 11-year-old boy from Waynesboro, Virginia contracted HIV and was told he had less than two years to live. The source: tainted blood supplies used to treat his genetically inherited hemophilic blood disorder. Twenty-one years later, this very child is a happily married 33-year-old with a beautiful wife living in Charlottesville, Virginia.

Catching Up with Bobby Hurley

Hoops Addict, March 2011
Jeffrey Pillow of HOOPSADDICT.com talks to former Duke Blue Devils great Bobby Hurley. Hurley was a member of Coach Mike Krzyzewski’s back-to-back NCAA Championship teams in 1991 and 1992, earning MVP honors for the latter campaign. He is the NCAA’s all-time leader in assists (1076) and appeared in the Final Four on three separate occasions.

Topics discussed include the role of his father, Bob Hurley, Sr. in shaping his mental and physical toughness on and off the court; avenging the 1990 defeat by the UNLV Runnin’ Rebels led by National Player of the Year Larry Johnson; playing under Coach K; which teams Hurley believes have a serious shot at cutting down the nets on April 4; his advice to young point guards across the land; and a few words of wisdom for soon-to-be dads.

Catching Up with Earl “The Pearl” Monroe

Hoops Addict, March 2011
Jeffrey Pillow of HOOPSADDICT.com talks to NBA legend and Hall of Famer Earl “The Pearl” Monroe, aka Black Jesus. Topics discussed include the origin of Monroe’s famous nicknames, the dynamics of the game today, the New York Knicks then and now, and the evolution of the NBA’s professional game.

“Every winter,” Kelley reminisces, “my grandfather would shoot at least one buck, bring it home, and string it up before taking it to the butcher. He was a master huntsman. I imagine he is what Teddy Roosevelt would have been if Teddy Roosevelt was a West Virginia coalminer rather than a born wealthy politician. Anyway, he hunted everything. I mean everything: bears, boars, deer, squirrels, whatever; and I seemed to always be there when he brought his kill home.

Portrait of the Artist: Jessey Schaudt

16 Blocks magazine, Issue #19
With her brush, she paints a different world, one in which the physical boundary is not limitable but bounded and replaced by the firing scintilla of the imagination. From her stained fingers, acrylic paint is flicked onto the canvas, and she watches it run, trailing downward only to sputter out, catching hold to a groove on the woven fabric medium; the trail of paint, blues and greens, yellows and reds mix, then harden; the seed of a new creation hatches, “released from any already existent thing,” [the] content lies in [itself],” as neo plasticist Naum Gabo said some seventy years past.

The Nervous Breakdown, May 2010
Two years ago, I walked into Shenandoah Joe’s on Preston Ave. in Charlottesville. Postured on a tall-legged, wooden barstool, a young man in his early 30′s busily dashed off letters on the keys of his laptop. White steam swayed side to side from the rim of his coffee mug, and then cut capers skyward. The vapors vanished but the rich, warm aroma of the roasting coffee beans lingered.

As I entered the coffee house, I carried a paperback in my hand—My Pet Virus: The True Story of a Rebel Without a Cure by Shawn Decker (Tarcher/Penguin, 2006), a tape recorder, ink pen, and pad. Sent by Dave Smitherman of Palari Publishing whom I had interviewed with weeks earlier at the Omni, I arranged to meet Decker for a magazine assignment to discuss his book, life, and accompanying activism.

Interview with Seth Avett of the Avett Brothers

The Nervous Breakdown, October 2010
Derk Richardson of the San Francisco Chronicle has described the band’s sound as “the heavy sadness of Townes Van Zandt, the light pop concision of Buddy Holly, the tuneful jangle of the Beatles, [and] the raw energy of the Ramones.” Hailing from Concord, North Carolina, the Avett Brothers have burst onto the music scene with the release of their acclaimed 2009 album, I and Love and You, and there’s no looking back.

I had the fortunate opportunity to speak with Seth Avett of the band to discuss—among other things—this very album, their recent rise in popularity, and whether or not beard envy was involved when working with the man himself: Rick Rubin.

The Nervous Breakdown, March 2010
Twenty-three and jobless, the beautifully flawed Taylor Schmidt arrives to the Big Apple in July 1991 a transplant from the rolling hills of Warrensburg, Missouri with an undergraduate degree in English Lit and aspirations of breaking into the world of publishing. What she quickly finds instead are the shuffling, blistered feet of tenderfoot Gen-Xers like herself stretching for city blocks in the sweltering heat, all with resumes in hand, and the sexually overt up-and-downs of power zealot editorial directors.

The pickings slim and competition fierce due to an economic downturn, Taylor stumbles with high heels from one employment agency to the next until being summoned by the Quid Pro Quo employment agency. Led by the august, cocksure Asher Krug, Quid Pro Quo guarantees its adept applicants “jobs to kill for” but at what price?

The Nervous Breakdown, March 2010
Pretend this is either an episode of Charlie Rose or a New Yorker podcast and I am a bewhiskered Deborah Treisman with an exorbitant amount of testosterone. For those of you just joining us, I am talking with New York based novelist, Greg Olear, author of the murder mystery/social satire Totally Killer (Harper, 2009). And by talking, I mean I e-mailed Mr. Olear and he didn’t report me to the FBI for stalking.

The Nervous Breakdown, January 2010
An unclad young woman stared at me from across the room. A straight line ran from her pointed breasts to my line of vision. I took a sip from my beer. Topless, unabashed, she positioned herself against the wall in a rather somber pose, half sobering considering the atmosphere. I took a drag from my cigarette, another sip from my beer. I wiped the froth from my lip. She had yet to blink, kept looking in my direction. Some specimen she was, I thought silently.

I exhaled a cloud of smoke and it hung heavy overhead like empty time. I walked her way. As I approached, she titled forward falling. I caught her, stood her back on the wall, and secured the loose piece of scotch tape that kept her shoulders square, her posture in perfect alignment.