Books are read from page one until the end. That’s not how books are written

Books are finished products, and are read from page one until the end. That’s not how books are written. When a writer begins writing, the book being written may very well start at the beginning. There’s a strong likelihood, however, that it may also start with the end in mind first. A writer may even start writing the book in the middle, then backtrack to the beginning or fast forward to the end, and then venture back to the opening.

Scenes are written out of place. Notecards are moved around. Ideas are jotted into margins with little arrows pointing to new potential destinations. Story paradigms are shifted, inciting incidents scratched, plot points adjusted. What you thought was the resolution all along is not the resolution at all.

Where does the story end, not where does it begin?

As the great screenplay writer and instructor Syd Field once noted: the first thing a writer needs to know about their story is where does it end?

Not, where does it begin. You need to know where it ends.

Going for a casual drive in your car with no destination may be relaxing from time to time. In writing, as in life, that can often lead to beautiful countrysides. It can also mean taking back roads that lead to nowhere or down streets with a chain link fence and trash cans along the side at a dead end in the middle of the night seventy five miles from home with a rottweiler barking at you. And, oh shit, you just ran out of gas.

I used to be a pantser, a term for writers who fly by the seat of their pants when writing. We get an idea and we run with it, in a nutshell. We’re not plotters. We don’t outline. We just start writing and see where it takes us. There’s a great amount of liberation in this practice. And, there’s a lot of imprisonment in it too — you just don’t realize it until you’ve turned the key on your own cell and locked the door, and the prison guard announces to the cell block, “Lights out.”

Don’t get me wrong: some of the words and sentences and paragraphs most endearing to me are the result of being a pantser. I’m mostly pantsing it now to be entirely forthright (okay, I am entirely pantsing it), and that’s much easier to do when writing a blog post. Writing a book, at least for me, being a pantser is a recipe for disaster. It’s the primary reason I’ve started so many different projects and eighty pages in, I get stumped and have no idea where to go. And so, I beat my head against the wall in frustration and the project is abandoned. When the Lights Go Out at 10:16 is a very good example of this.

What’s funny is that it’s taken me a lot of trial and error to even realize I’m a pantser, and that I’ve been setting myself up for sabotage again and again over the course of my writing life.

To quote the punk band the Descendents, “I like food. Food tastes good.” And, I think food is an apt metaphor as it relates to cooking up a novel or memoir, or even a short story.

It’s like deciding you’re going to create a gourmet meal without really knowing what the meal consists of. Sure, you know the main ingredient is chicken. You know salt and pepper will be needed. But there’s a big difference between baked chicken and chicken makhani. And, if you’re making chicken makhani, you probably should have an inkling of an idea what the ingredients are and what you’re doing. So it’s best to grab the peanut oil, garam masala, cayenne pepper, and ginger garlic paste at the grocery store before you start the dish, as opposed to starting your chicken makhani, then realizing you need those ingredients while your chicken makhani is already in the oven. Oh, by the way, chicken makhani doesn’t go in the oven. You cook it in a skillet on your stovetop.

False starts in a marathon with no finish line

That’s probably why in 2003 on into 2007, I didn’t know where to go in the memoir I was writing. I started at the beginning, then had no idea that I was actually living the middle of the story as it was taking place. I knew what the end could be, but I didn’t want that to be the end. As a matter of fact, and hope, I didn’t want there to be an ending. If there was an end, then my story was a tragedy; and I didn’t want a tragedy. I wanted a comedy with a happily ever after ending.

When you think of terminal brain cancer, that type of diagnosis doesn’t typically equate to a happily ever after ending. Yet, despite my friend’s diagnosis and ultimate demise in 2007, there was a redemptive element in the unfortunate circumstance he found himself in and which led to his death. It’s taken me a long time to realize that.

And, it’s why now, with over fifteen years having passed since the story began, I realize that the story I started writing in 2003, that began at the beginning (the set-up), must begin at the end (the resolution) to be properly written. Otherwise, the narrative and character arcs that take place cannot support the middle (the confrontation), and I will continue the perpetual cycle of locking the door to my own cell night after night, starting and stopping and false starting all over again.

I’m sort of done with that. So, as I continue to work through this, and provide some of my insights from the perspective of the writer just as I did in “What’s In a Name,” I hope you, as the reader, will continue reading, too, understanding that a story is not written the same as it is read.

To end with a quote from Syd Field, “Confusion is the first step toward clarity.” 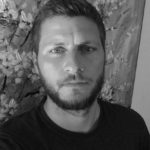 One reply on “Author Insights: Writing a Book Is a Very Different Experience Than Reading a Book”

The Narnia series by C.S. Lewis were not in the order written if I was told correctly because he didn’t realize when writing the 1st book that more would follow making it a series. I may be wrong about this statement and if I am feel free to corre t me so I know differently and correctly.