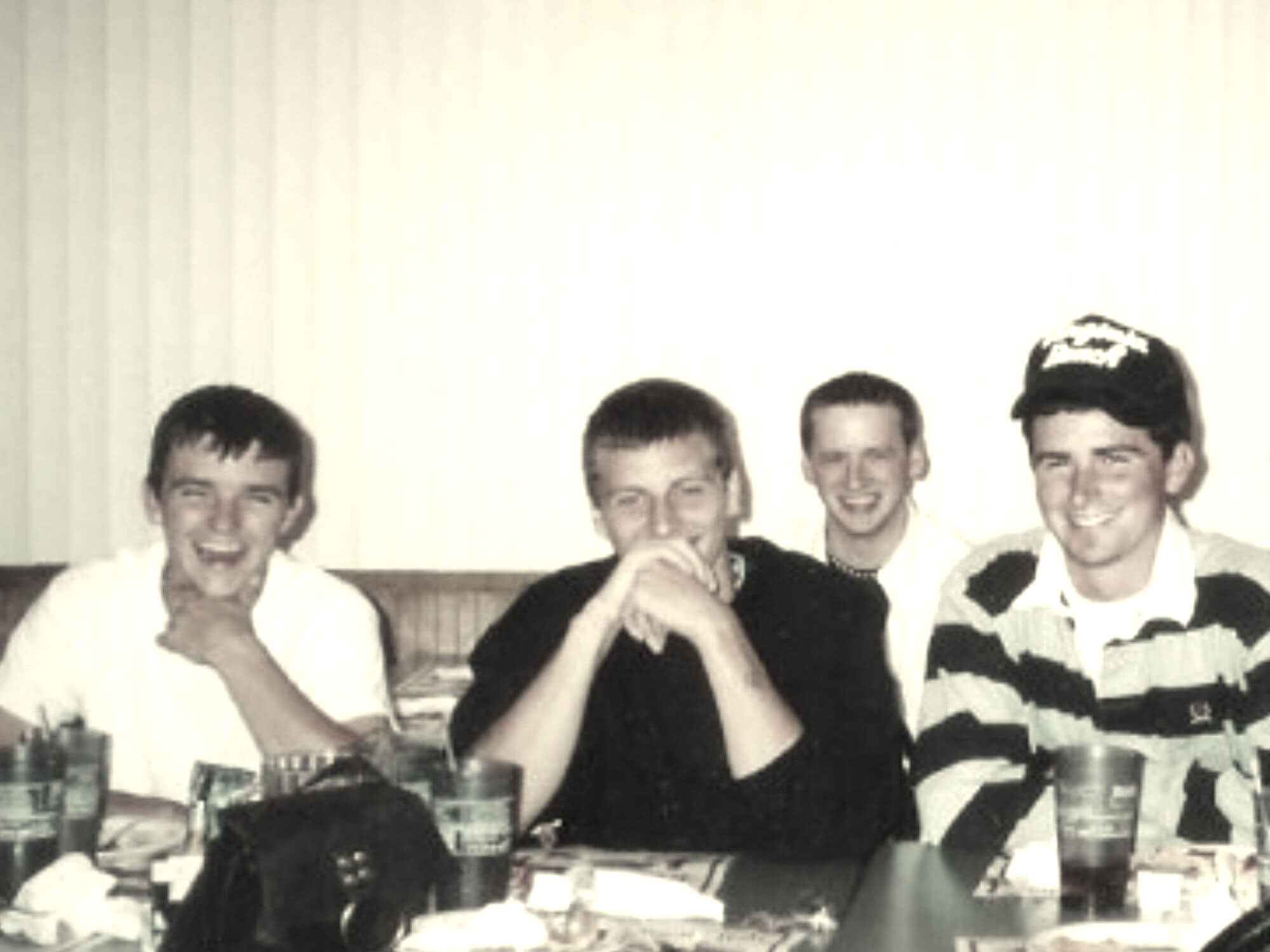 Before you read this, read:

THE NEW KID was christened at birth Jeremiah Hamlett. Jeremiah Franklin Hamlett to be precise. And, he was to be my next door neighbor. The oldest and wisest of all, Jeremiah was born May 8, 1979, at Camp Pendleton Naval Hospital in California. It was a Tuesday, 4:06 AM. He weighed 7 lbs., 11 ounces; and, like the rest of us bean poles in Phenix, Jeremiah didn’t gain much more than that despite the bottled calories found in his first true love: mayonnaise.

“He cried a little, so the nurse laid him on his stomach. He stopped crying and just stared at me,” his mother Mary Ann would later say to me. “He was laid back then, too.”

No doubt Jeremiah was cool as a cucumber, always in his element with a solid head on his shoulders. In terms of future potential in life, there’s really no argument that Jeremiah had the most in his cup compared to the rest of us. Jeremiah was a smart dude. Intelligent as a mother[curse word redacted], yet witty and kind all wrapped into one.

I didn’t like him at first. Hell, Robbie didn’t even like him at first. It was a youthful dislike. Its origins sown merely in unfamiliarity. And, as Robbie and Jeremiah grew closer, rooted, for me, in jealousy. He threatened my friendship with Robbie.

He had moved in and replaced me, I felt. It was stupid to think this way. I know that now, of course, as I look back on it. But what can I say? I was, after all, only a few years removed from wetting my pants and still, at that age, not the best at keeping my shoes tied for more than fifteen minutes.

“Get some velcro,” Jeremiah and Robbie would yell in unison during our matches of 21 in basketball when I’d pause the game to tie my unlaced shoes.

A few years had to pass us by for my bitterness against Jeremiah to cease in full. When he first moved into town, he had quickly become buddy-buddy with Jay Tucker. They were the same age, in the same grade at Phenix Elementary just down the road. Robbie and I stayed as close as we had always been.

The four of us would fight on occasion. Four elementary school aged wannabe alpha-males vying to piss on the same tree.

The bout was set.

Robbie and Jeremiah would start arguing about something. Who knows what? Anything really. Then, Robbie would try and pop Jeremiah in the head. In turn, Jay would stick up for Jeremiah, so I would sling an acorn or walnut, or whatever was handy to throw, sometimes a basketball, upside Jay’s head to rouse him my way.

It wasn’t quite Muggsy Bogues standing next to Manute Bol. But the size comparison between me and them was pretty stark.

The four of us would go sliding down the hill at the basketball court, punching and hitting one another, dirt kicked up into an orange cloud, the loose rocks off the side of the hill making us bleed more than each other’s fists. The reason for these confrontations was always something juvenile. Two prime examples being:

During a game of basketball, someone had accidentally kicked over someone else’s 25 cents soft drink from the RC Cola machine downtown. And by downtown, I mean Main Street in Phenix. And by Main Street in Phenix. You know what, I’m going to have to redirect you back to the section explaining exactly how small Phenix, Virginia, really is.

For 98% of Americans and 99% of all global citizens, it’s just a difficult geographical area to fathom unless you’ve been there. Phenix is sort of like the town of Mayberry from The Andy Griffith Show, except whereas Mayberry had 5,360 residents, Phenix only has about 200. And, whereas Mayberry had establishments like a grocery store, jail and courthouse, theater, multiple barber shops and the like, Phenix had, at the time, two mom and pop convenient stores, one of which closed at 5:30 PM Monday – Friday, and at 12 noon on Saturday. Open Sunday? That’s funny.

Whether the cause for the spill was an accident or intentional didn’t matter. The RC Cola was still partially dumped out, 25 cents down the drain, and dirt and rocks had accumulated around the opening of the can so it could no longer be drank.

Or, maybe the reason for the incursion was someone had spit on the basketball court and their spit had gotten on the ball and then onto the hands of the person dribbling the ball. An all too common occurrence.

Whatever the case, a melee would ensue. It was on like Donkey Kong.

It was a slow process at the start of Jeremiah and Robbie getting along and becoming the close friends they would eventually become. It was like Magic and Bird the college years before Magic and Bird the NBA years. They started off as arch rivals, and through daily battles, grew to like and respect one other.

And, I will say, that though the animosity eventually subsided, I always made it a point in my youth to keep a certain temperament of jealousy and fury directed at Jeremiah when we opted to play backyard football in the field behind his house or in the small patch of grass behind the basketball court. Jeremiah always played quarterback. And, with the football in his hands, vengeance was mine. I counted:

And then I’d rush at Jeremiah in the pocket like a starving dog thrown a raw bacon strip scrap straight from the pack. Jeremiah would scramble. Much to my dismay, animosity, and vengeance, he would often escape passing the perfect spiral to Robbie who stiff-armed everyone in his path on his way to a touchdown while wearing one of those mesh football jerseys that were cut in half at the stomach area. I don’t know what those things were called. But Robbie had one. It was like a crop top, but for dudes.

The technical name for this type of shirt may very well be a crop top football jersey, which I think to this day, Robbie may still wear, even if he won’t admit it.

He looks to his left, to his right. The coast is clear. Out from the bottom dresser drawer comes the crop-top blue and white football jersey, a smile instantly painted from cheek to cheek on Robbie’s face.

Speaking of fashion, Jeremiah almost always wore pants growing up. Even when he curled his way down the steps inside his home to make his way to the basketball court to play basketball, blue jeans covered his legs. The rest of us wore the oh-so-fashionable shorty-shorts of the time ala the type of shorts donned by former Utah Jazz point guard, John Stockton.

Personally, I don’t blame Jeremiah for covering up his legs. If you have never seen Jeremiah in a pair of shorts then I highly recommend purchasing UV-protectant sunglasses prior to this experience. His legs are so white it is as if you are looking at a solar eclipse dead on. I know how the Italian physicist, astronomer, and mathematician Galileo Galilei felt after one too many attempts at ogling the sun with this telescope.

Blind, a. (and adv.)
1. Literal.
a. Destitute of the sense of sight, whether by natural defect or by deprivation.
b. Temporarily deprived of sight, as when dazzled with a bright light.

However, pale, white legs, even if they are strikingly close in color to that of mayonnaise, do not hurt one’s jump shot; and still, to this day, I will swear that Jeremiah Hamlett had the purest jump shot I have ever seen. He was the Drazen Petrovic of Phenix, Virginia.

To many, this may not mean much; but to me, a firm lover of the game of basketball, it is imperative I say this. Basketball was my life growing up. At the least, the backdrop. And for a large part, still is. I love basketball more than Havarti cheese. And, that says a lot.

And no one, not a single soul, I have ever played against can stroke a three as consistently and as perfectly as Jeremiah. It was all in his release. The flick of his right wrist. His deceptive head fakes to get you off the ground and create enough space to release his shot.

When I earned All-State and All-Tournament First Team honors in basketball, I called Jeremiah on the phone to tell him.

“Congratulations,” Jeremiah said. “Guarding me all those years helped you out.”

You just read an excerpt from When the Lights Go Out at 10:16. A story of a 1980s/1990s childhood growing up in small town America. A story of life and friendship in the face of terminal cancer.