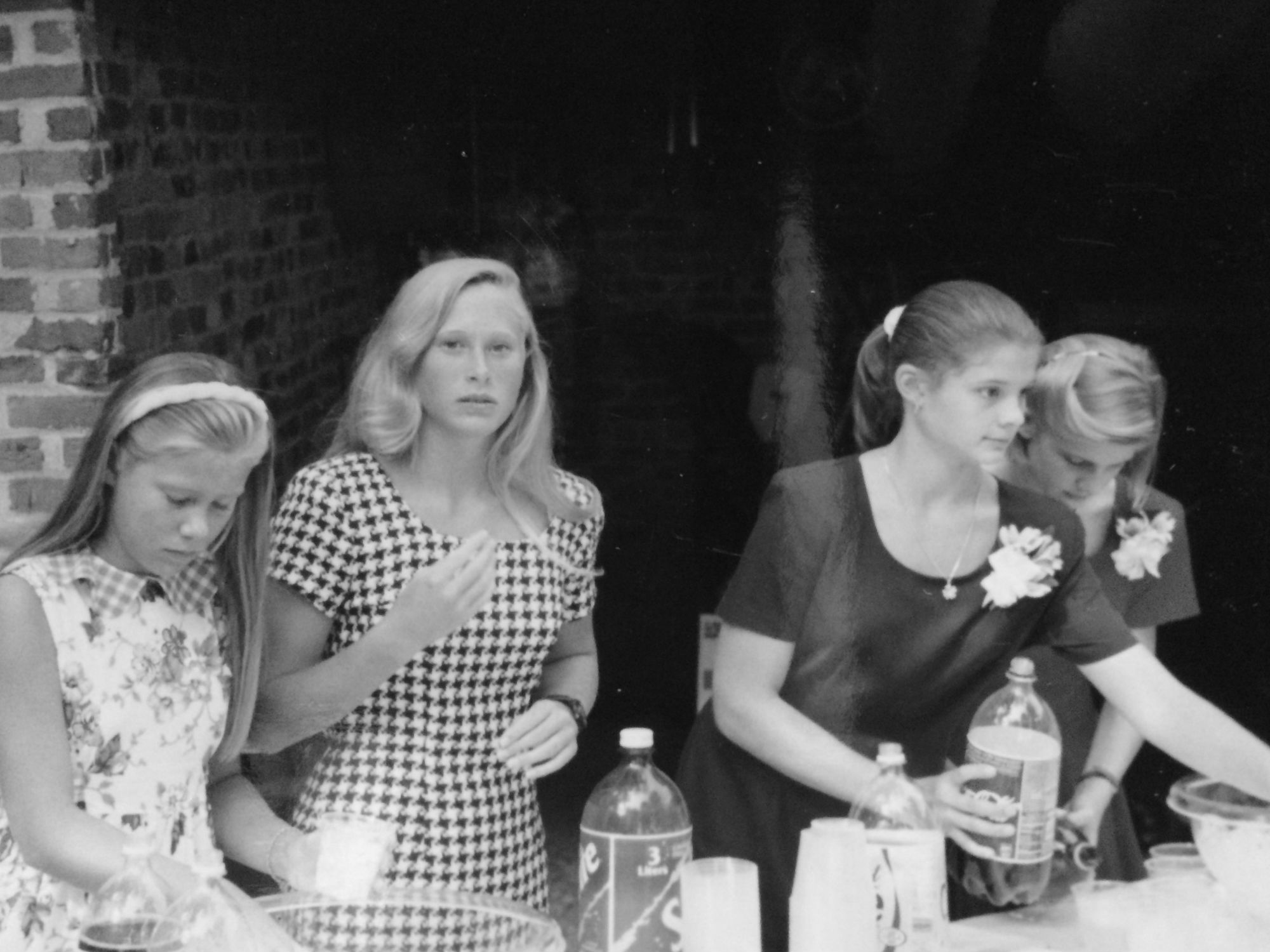 Tenth grade, Mrs. Agee’s computer class. A notecard with your name sat propped on the F-keys of the keyboard signaling your assigned seat next to me. Upon seeing your name, elation swept over me. I tried to hide it so as for it not to be visibly written on my face when you appeared. Play it cool, is the phrase.

“Hey, that’s funny,” I would say as you removed the chair from under the table to sit. “You got stuck sitting beside me again.”

The previous year in ninth grade was only the second time we’d ever had a class together—Ms. Hybl’s science class. Back table, left. You and me. I didn’t know you until then. I knew of you, of course. Like every boy in middle school, I thought you were beautiful. Beyond beautiful actually.

You were smart too. The local newspaper confirmed as much at the end of each grading period when the honor roll was published. Straight A’s. Sometimes I would appear on this same list with you, but a little further down—before algebra introduced itself into my life.

Somehow, during our entire stay in middle school, and despite our rural upbringing, we managed to have but a single class together—eighth grade art class in which you sat what seemed like on the other side of the globe from me. I’m not sure I ever spoke a single word to you. It would take high school for our paths to cross more frequently, and even then, it was minimal.

One by one, kids entered the door of Mrs. Agee’s classroom and took their seats. The clock ticked on the wall. The second hand inched forward. The bell rang and Mrs. Agee shut the door.

The seat beside me was still empty. The seat where you were to sit. I kept waiting for the door to open behind Mrs. Agee and for you to walk in. When you searched the room for your seat, I was going to make eye contact with you and point toward the seat next to me, and watch you smile and hurry over. You’ve always had such a beautiful smile.

The clock’s minute hand advanced, then the bell rang again. Class was dismissed. A feeling of sadness washed over me as I put on my book-bag and pushed in my chair. I looked at the keyboard where your notecard rested upright on the F-keys. I’d have to wait two days to try my prepared line on you that I was going to pretend was entirely spontaneous.

“She’s lost a lot of weight,” I heard someone say at a lunch table near ours. “Like so much she could die.”

We used to drive everyone crazy playing Skatman John over and over during lunch. That, and “Girl on L.S.D” by Tom Petty, which was always a humorous selection considering we were on school property at Randolph-Henry.

Upon the at once noticeable intro of the song, someone unamused at the table adjacent to us said, “Really?”

“She didn’t come to class today.”

“Do you not know how beautiful you are?” I was going to say to you as you sat down beside me.

I didn’t know it had little to nothing to do with looks, that what it really was about was control.

I knew my inner voice was right. I’d never have the courage. So, I wrote you a note. A note, that’s something I could do.

I was going to give you the note on a Friday as we left class then depart immediately in a different direction. That way I could spare myself the embarrassment of your initial reaction. The weekend would then assist to ease the lingering awkwardness.

A note I never gave you—because you didn’t show that day, or that week, or that month.

Just an empty seat next to me—the name card Allison Watkins no longer resting on the F-keys. A reminder that you weren’t there beside me.

I used to watch the door waiting for you to appear. Eventually I stopped. But occasionally, even as days passed into weeks, I would glance over my shoulder in hopes you would appear as the clock’s hand ticked forward to announce the beginning of class.

“Hey, that’s funny,” I would say as you made your way over toward me. “You got stuck sitting beside me again.”

“Do you not know how beautiful you are?” I was going to say to you, but I didn’t understand what you were going through then.

This post is filed under “Let Me Count the Ways,” a series of vignettes and journal entries about my love for my wife.

Hi, there! Thanks for reading. If you enjoyed this journal entry, consider sharing the link with a friend or family member, or start a conversation on Facebook or in the comments section below.

This is one of the sweetest tributes I’ve read. Made my chin wobble a bit.

I cried when I wrote it. I’m not even exaggerating. I’ve thought about this time in my head here and there over the years, but I’ve never sat down to try to capture it in words. The tears were a-flowing this morning as I pecked away at my keyboard.

Thank you for reading.

You made my eyes leak. I’m glad your wife got better. She is indeed stunning

Truth be told, I made my own eyes leak writing this. It took me back to that time in my life. We didn’t know each other well then. We’d had the one class together, but she was such a sweet person. It was so sad to know she was going through a tough time. I remember actually being worried I would go to school one day and someone would say she had passed. Every day I always said a little prayer that she would be okay.

And you made me cry again

Thanks for the kind words Rich. Means a lot coming from you.

You did me in. Beautiful. Just beautiful. My daughter was bulimic for a time and I felt so helpless as her dad. I wanted to take all her pain away but I couldn’t.

How’s your daughter now dm? I hope she’s okay. I understand it’s a lifelong struggle, and as a dad, I can certainly understand on some level how helpless you must have felt. Granted, no one ever fully understands a situation until they are in it.

I love the way you write about real stuff. The feelings you share are so beautiful. I too have struggled in this area of eating disorders and body image, and many of the things you write about… For you to share such deep and personal things from your own life’s story is truly a gift to others. Such encouragement. I’m always so excited when I have an email telling me you have a new post. Even the titles draw me in. Thank you Jeff.

Thanks for the kind words Colleen. I’ve learned more intimately about the underlying causes of eating disorders through my wife, and how it can be very different for every one. The general perception, and it’s the one I and most everyone I knew had when I was in high school, was that it was just about looks and body image. While she does indeed have body dysmorphia, her particular story goes far deeper than that. For her it was a way to “control” certain parts of herself that she didn’t feel were under her control—that an eating disorder is not solely an eating or weight issue. It’s the result, not the cause. The causes are certain mental perceptions of oneself. She’s been open to an “interview” on the topic since we started dating. I told her how helpful her story would be to others.

Jeff, reading this post reminded me of God’s faithfulness, especially in times of despair. He surely answered our prayers, and by His infinite grace, her life was not only spared, but is flourishing. Beautifully written.

Thanks for reading Pam. I know this was a tough time but I am glad everything turned out okay.

Thanks Emily. I’ve wanted to write on this topic for a while because of its importance.

Jeff, what compassionate words and feelings you have shared. I remember those days well myself, as I was missing Allison’s mom, Pam, as my teaching partner and dear friend while she stayed with Allison. Those were anxious days for me as I feared for both of them. I don’t recall that we ever talked about it as teacher/student, which is sad as we could have helped each other. I am so glad that you are now able to shed light on anorexia for others. Thank you, and bless Allison, your beautiful children, and you.
Mrs. Agee

Thank you for stopping by and sharing your thoughts Mrs. Agee. I’m sure Pam missed you as well. I’ve learned a great deal about anorexia and eating disorders from being married to Allison.

This is beautiful… When one understands someone else’s struggle it’s amazing… But when one is so young to be so compassionate… Beyond amazing.

Thanks for reading, Faith, and for the kind words. I apologize for my delay in replying back. I didn’t receive a notification about this comment for whatever reason. Looking back on this time all those years ago gave it a new perspective for me and what my wife was going through at the time, unbeknownst really to most all of us, even though it was right there before our eyes.